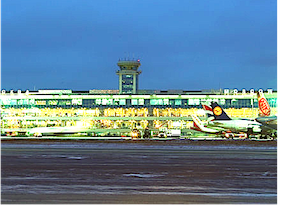 FREED BY AN ANGEL

At the Moscow airport Levi was apprehended and his bags were searched. As the bibles were found and brought out into the open spectators congregated around the place were the smuggler was caught. Another plane had just landed and more people we approaching the checkpoints.

As the custom officers ridiculed Levi's faith and mocked his God something had started to build up within the Bible smuggler; the Lion of Judah was about to roar.

The audience swelled up, a perfect opportunity to preach the Gospel. Levi's father was born in Belarus. Russian was taught in schools, so being quite fluent in Russian Levi grabbed one of the confiscated Bibles, opened it and fearlessly started to preach. No one dared to interrupt him. KGB agents and custom officers stood still as if commanded by a general. Their faces were red, either from too much vodka or from fear. They started to perspire. Obviously they did not know how to handle this bold youngster.

No one rushed to pass through the checkpoints; all eyes were turned toward the young preacher with Bible in hand. No one has ever seen such boldness in the Soviet Union. Everything stopped and people listened, there were several hundreds of people and they needed the witness (Mat. 24:14).

Jesus said, "this gospel of the kingdom shall be preached throughout the whole world for a testimony to all nations, and then the end will come." Someone had to bring this witness and the testimony of salvation first. The young preacher was saying within himself, "It does not matter what happens to me, at least I'll fulfill the scripture and be all right with the Righteous Judge who commissioned me to do this."

Levi ended his discourse with these words: "You are taking the bread of life out of the starving mouths. Remember that you will be judged for it on the last day." After he finished his speech he asked the audience if they would promise to read this book. Most had affirmatively nodded their heads.

Things started to move again and people proceeded to the checkpoints. One of the customs officers, a short man, approached the smuggler and whispered in his ear, "My mother believes like you do." Levi then asked him to take care of the precious cargo. He nervously looked around and grinned, "Yes I will." Then Levi asked him again if he knew what to do with them. The officer winked and assured Levi that the Bibles were under his supervision. In those days a Bible fetched about 500 Russian Rubles, about the same equivalent in US Dollars.

Before Levi was taken away he said to all the officers that the Bibles are a gift to them. They laughed.

As he was about to cross the checkpoint Levi knew that once they find two different documents in his pocket he will be doomed; for one document was the American Re-entry Permit containing multiple entry visas to Israel, while the document in their possession was a Polish Consulate Passport issued in Chicago, which did not contain any visa stamps. Levi stood perplexed. All of a sudden he begins to drift away. As if in a trance he hears a voice, "Take the re-entry permit and put it in your bag." He obeys and zips the duffle bag. He awakened from a dream like state when someone tapped him on the shoulder. A man was asking him to follow him. Levi was about to take the bag, but the man told to him to leave because it was already searched.

Levi was stripped and searched; the American Re-Entry Permit was not found, but only a mini tape recorder; a novelty in those days, but not yet in the East. The officer had asked Levi if this is a 'fotoaparat' (camera). He replied saying that this was a 'magnetofon', (tape recorder). They asked him to play the tape. Instead of playing the tape Levi quickly erased some memos his secretary left for him. The office was upset and grabbed the tape recorder screaming, "What did you do?" "I erased few things I did not want you to hear" Levi said. This disrespect enliven the man.

After the interrogation Levi was escorted to a photo shoot area, but the photographer had difficulties with his camera. He made many pictures, but what he had really seemed to enjoy was the verbal abuse. After he finished photographing he went away leaving Levi alone, but on the way out Ben cursed his camera so that no film would develop.

Holding a Kalashnikov pointed at the prisoner a young soldier was now escorting Levi to a bus and on the way to the arrest house. It was mid winter and freezing cold, the heating did not work and there was no hot water; the toilet was unusable and in the middle of the room there was a frozen water puddle. The sealing was leaking and the bed was wet, the measly brown rag of a blanket could not warm a mouse let alone a human. Outside the door a soldier stood guard.