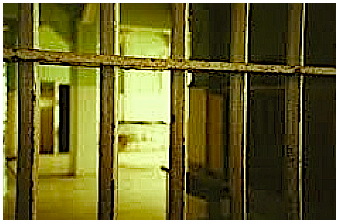 Levi was frightened while all sorts of alarming thoughts raced through his exhausted brain. Did he mishear the Lord; was it he just talking to himself making up brave decisions? The confusion grew even worse. The only way out of this was to sing and dance and quote scriptures; and that's what he did. Levi sang aloud and danced, not only to cheer himself up, but also to warm his body. There was no way he could even touch that cold and filthy bed. The exhaustion was getting to him and the words started to mix with tongues of the Spirit. Levi just let it out and spoke words that felt good, but made no sense to the conscious mind.

Finally the first light peered through the frosted window. About 6 AM a soldier with AK-47 aimed at the detainee opened the door. As they were exiting the building Levi asked the soldier as to where he was being escorted? He scathingly replied, "We are sending you back to Warsaw, chuckling with scoff, they are waiting for you there."

The Russians had enough time to contact the Polish authorities only to find out that the apprehended bible smuggler was in fact a deserter, a crime punishable by 6 years in prison. A cold sweat drenched the bible smuggler. To add trouble to trouble; he was now being sent back to a military prison in Poland.

On the way to the airport he could only pray and reason with the Master. "If you wanted me back in Poland then you could have prepared me for it Lord, why this dreadful way?" Then all of a sudden God opened the scripture bank in Levi's mind. "The Lord did not bring Israel out of Egypt so that He might bring them back to Egypt... He brought them out in order to bring them in to the Promised Land." He'd not only supernaturally brought me out of the Communist oppression, but brought me into 'the land of the free and the home of the brave.' At that moment his longing for American freedom became quite intense. Levi longed for his US citizenship and for a moment his trust in the sovereignty of God shifted elsewhere.

The Sovereign One had His hand on the entire situation.

Levi remembered the promise of supernatural deliverance and had begun to look intently at the soldier, but what he found was a hateful face. "He couldn't be an angel... no." He thought.

At the airport he was left alone in a room with a guard outside the door. Eagerly anticipating his miracle any moment now. Levi showed signs of joy; for no apparent reason his spirit was elated. The door opened and an officer asked him to step out and stand against a wall. Obediently he moved toward the wall and at that moment he thought… They are going to shoot me! Yes they were… Bit with a camera.

From behind his back the officer pulled out a Polaroid camera. Obviously the film used yesterday did not develop so now they are trying an American instant camera. That model of a camera contained only 8 shots; the spliced papers had to come apart and after less than a minute an image would gradually emerge, but no image had emerged. They made another photo, and yet another. Levi was counting, so they came to the seventh. Time was ticking and this strange joy in his stomach… All this meant something much more important than playing with a Polaroid camera. Levi knew that in time of trouble the sent vassal has a tremendous power. That is the law.

All his prayers are instantly answered. At that moment he knew that something supernatural was about to happen. He permitted the 8th picture to develop, but asked the Lord to make it fade out after he is gone.