It must be said here that knowledge of not only the Scripture but above all the essence of God's Word, as given by the Holy Spirit, is what we are after. God is one and anything that gathers (and not scatters) makes oneness; therefore, logic and perfect sense. The superior IQ is not ours but His; it comes to us as God's gracious gift; and with this gift we are busy. The result is astounding. We do not take any glory forthat which God reveals to us. All things come from God and go back to Him; He is glorified thereby. Jesus said, "[John 15:7-8] If you abide in Me, and My words abide in you, ask whatever you wish, and it will be done for you. My Father is glorified by this, that you bear much fruit, and so prove to be My disciples."

We do not indoctrinate abut allow total freedom which comes to us with the space of God's grace. Each person attains perfection in his or her own time. Some were born yesterday; others were born 70 years ago. The 70 years one knows more than the one day old baby. So it is in the realm of God's Kingdom on earth.

Questions like these keep on coming. In order to not waste time we would rather direct people to this page.

Please explain the head and heel of Genesis 3. · I was also reading Genesis 3:20  where it is written that Eve is the mother of all life · How is this meant exactly when she isn't the mother of the pre-Adamite people?

The head and the heal speaks of ROSH (beginning, start, head) and AKEV (end, final, latter). To this very day in Synagogues the Torah portion is being read from the ROSH until the AKEV, which symbolizes something earlier and something latter. When God said to Nehash that the seed of the woman should crush him on the head and his seed should bruise Eve’s offspring only on the heel.

I just came from a little walk when I asked the Lord to explain to me this verse from Genesis 3:15. He replied, "Check the word 'bruise'" and added that it had hardly anything to do with bruising or even hurting. Curious, I came home and started my research.

In synagogues worldwide we read from the Torah starting with the ROSH (start, head) and end with AKEV (heel or end). Therefore heel means something later and at the end.

The word currently most translations render is "bruise" (Hebrew root word, thshuph - yeshfur - "shall bruise") but it may also mean 'hurt' if one interprets falling on as hurting.

Let us use God's gift of logic now: "In the beginning the cursed physical image of Nechash will (fall on you), but at the end you and your seed will overcome IT; the fleshly image of Nechash (you will hurt IT by falling on the animal nature)." Like an eagle that falls upon its prey and captures it. 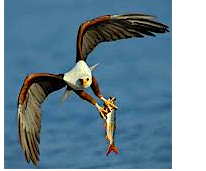 Read more on the blog »

1. The bruising or crushing of the head deals with the affliction of the righteous in the earth through the Kenites = ROSH, the beginning. Jesus said in Matthew 5: 11-12, “Blessed are you when people insult you and persecute you, and falsely say all kinds of evil against you because of Me. Rejoice and be glad, for your reward in heaven is great; for in the same way they persecuted the prophets who were before you.

2. The heel AKEV speaks of the righteous ultimate victory. (Book of Revelations speaks of it) "First comes the natural then the spiritual" (1Corinthians 15: 46).

"Ima Kol Chei" means "Mother of all life, which can also be translated as "of all living." Look how Adam felt. It was his line and his alone, for he knew nothing else then.

After Cain left home and went to Nod and met other people Adam then had learned something new. In Adam's mind Eve was the vessel of all life on earth and he said that while still in Eden and after knowing good and evil, but without experience, nor how to handle this knowledge.

Why the knowledge good and evil? There were evil people on earth and perhaps some were good; so he had to be prepared for the new world into which he was brought and was about to be introduced to.

Nechash was sent by God of course, which is in line with what I said above. In order to instigate the desire and then the choice Eve had to be introduced to no other tree but the tree of knowledge first; and that is the reason why the sentence starts with "BEHOLD" (KJV).

* Introduction to seeing and the creation of a desire.

Why? Because God is the ALL-Mighty and not Part-Mighty; everything else is of the Kenite mind (accidental, sensational and mysterious thinking); a mind that hates God and anything to do with Him. This happened in religion and exists by surviving to this very day. Dualism is the official creed of Christianity and those who have problems with God's absolute sovereignty over all of His creation only give in to the Kenite traits within them. They cannot explain those mysteries with their theology, but also won't let go off of this outdated form of theology. You can't hold on to the tail of an old or even dead dog and at the same time to a young dog's tail for the young dog will pull you away from the old dog. In the same way you cannot beat on a dead horse for it won't go any faster and anywhere; he is dead. So are many today who want revival and profound changes but won't go for any extreme measures to change the status quo.

I just wanted to ask if you have anything about how God cursed the NECHASH (known as serpent and equated with Satan) in Eden; why He did so?

The Hebrew name "Nechash" is the root of word of Nechushtan the name of the serpent Moses lifted up on the wilderness. Nechash was God's chosen vessel for the job. Just as the son of perdition (john 17:12), Judas, whom God chose to betray Jesus (Judas will be erased from all existence) so it was with Nechash. Balaam the son of Beor and the speaking donkey… Prophet Micaiah and the lying spirit in the mouth of the prophets (2Kings 22:22)… The evil spirit from the Lord in Saul's case (1Samuel 16:14). In this cease is also Satan a chosen angel for the job of prosecution in God's court of law.

But as to why did God curse Nechash can only be explained in the context of the educational process. As already said, Adam and Eve had to be prepared for the outside world. They had to know good and evil, how it feels and what the consequences will be. Nechash was part of this education and now pay attention to this: only the physical garment of the beast of the field (as the Bible states, Hebr. HAYYAH) was cursed. it changed from the four-legged creature to a legless slithering one.

[Genesis 3:14] Cursed are you more than all cattle, and more than every beast of the field; on your belly you will go, and dust you will eat…

An angel was not cursed but the living garment he took. Flesh and spirit cannot be mixed.

Nechash's body is susceptible to fire but angelic form is not.

[Judges 13:20] For it came about when the flame went up from the altar toward heaven, that the angel of the LORD ascended in the flame of the altar.

What we do is this: we take the entire Bible and synchronize scriptures with the help of God's IQ, which the Holy Spirit of Truth. By taking a larger body of scripture, which all point back to the One God making logical oneness, we extract the absolute truth.

Jesus alluded to this creature by saying in John 3:14-15, "As Moses lifted up the serpent in the wilderness, even so must the Son of Man be lifted up; so that whoever believes will in Him have eternal life." Today, a wrapped around a medical glass vase snake is the symbol of pharmaceuticals. In Numbers 21:9 we read, "Moses made a bronze serpent and set it on the standard; and it came about, that if a serpent bit any man, when he looked to the bronze serpent, he lived." [2Corinthians 5:21] He made Him who knew no sin to be sin on our behalf, so that we might become the righteousness of God in Him.

Obviously this symbol deals with duality and an antidote against deadly poison; hence healing. Nechash did so because he did not act on his own initiative, but it was God who further educated His newly created beings. There had to be the education of BOTH - the mind (RATZON) and also the soul (NEPHESH). So, emotions if the NEPHESH get education in consequences. Curses (RAH and AROR) are not like the pagan cursers, but rather they deal with something negative and bitter. So, one education is for the intellect; therefore understanding; and the other is for to the soul. Then we have this, [Genesis 3: 22-24] Then the LORD God said, “Behold, the man has become like one of Us, knowing good and evil; and now, he might stretch out his hand, and take also from the tree of life, and eat, and live forever” -- therefore the LORD God sent him out from the garden of Eden, to cultivate the ground from which he was taken. So He drove the man out; and at the east of the garden of Eden He stationed the cherubim and the flaming sword which turned every direction to guard the way to the tree of life."

The education was incomplete. Today God's education continues, but some do not want to be taught they want frozen in time immovable religion while others are starving for more of God and more of His life-transforming truth.

[Genesis 5: 21-24] Enoch lived sixty-five years, and became the father of Methuselah. Then Enoch walked with God three hundred years after he became the father of Methuselah, and he had other sons and daughters. So all the days of Enoch were three hundred and sixty-five years. 24 Enoch walked with God; and he was not, for God took him.

He learned God's ways and He walked with God and His ways. Enoch chose right.
[Deuteronomy 30:19] "I call heaven and earth to witness against you today, that I have set before you life and death, the blessing and the curse. So choose life in order that you may live, you and your descendants…"

REPLENISH THE EARTH (KJV)
[Genesis 1:28] Be fruitful, and multiply, and replenish the earth… (MAKE FULL) (Hebrew MA'ALE) to fill. Not to fill Eden only but the entire earth.

God calls us again to choose right. It is so consistent throughout the entire Bible that only a complete idiot wood not want to choose, and such are many today.