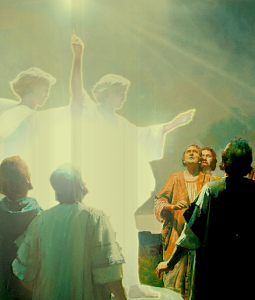 **This tradition of the TEN MEN continues to this day in synagogues and houses of prayer called SHULL), without at least ten men no prayer service can begin. God’s presence rests on the TEN, which speaks of divinity, Hebrew letter YUD. From this we learn that God cannot destroy a city if there is at least ten righteous – praying God-fearing men.

[Genesis 18:16-33] As soon as He had finished speaking to Abraham the LORD departed, and Abraham returned to his place. This third being, an angel, was called the LORD YHVH.

Summary: We shall be like angels, genderless, no man no woman, no masters and no slaves, no Jew and no Gentiles. This is the Kingdom’s spiritual reality already now. Men of God, sons of God and angels must be discerned with the help of the Holy Spirit who gives us His logic. When the two men (the text clearly states two men) went to to Sodom and Gomorrah one man (an angel) remained with Abraham; and through Him Abraham spoke with God the LORD (YHVH). Flames do not bother angels, neither do they affect God’s overcomers.

[John 14:27] Jesus said, “Peace I leave with you; My peace I give to you; not as the world gives do I give to you. Do not let your heart be troubled, nor let it be fearful.”

Where did Jesus get this wonderful peace from, from a heaven where wars were or still will be; and where supposedly Lucifer rebelled and took with him 1/3 of his angels?

What kind of peace?  From which realm did Jesus take that peace?

Hence, it is not of this world – through which properties people filter their imaginations about heaven, God and His kingdom – but a kingdom of PERFECT PEACE.

God says through prophet Isaiah [Is. 26:3] The steadfast of mind You will keep in perfect peace, because he trusts in You. The realm of perfect love, which casts out fear and the realm of perfect (healing) peace is one. Once you acquire this most glorious peace your mind will also be healed and you will enter another realm yet unknown.

[Philippians 4:7 ; 9] And the peace of God, which surpasses all comprehension, will guard your hearts and your minds in Christ Jesus. (9) (…)  and the God of peace will be with you.

[Matthew 5:9] Blessed are the peacemakers, for they shall be called sons of God.

[Romans 8:14, 19] For all who are being led by the Spirit of God, these are sons of God. [19] For the anxious longing of the creation waits eagerly for the revealing of the sons of God.

The first God’s son was Adam.

Adam and his sons were called sons of God.

[Genesis 5:4] Then the days of Adam after he became the father of Seth were eight hundred years, and he had other sons and daughters.

Until that time no daughters were yet born. At that time Cain was long gone sojourning in the land of Nod in Ashur where he married another, most likely Sumerian.

God never has condoned incest for He is consistent in His character. He forbids incest.

[Leviticus 20:17] f there is a man who takes his sister, his father’s daughter or his mother’s daughter, so that he sees her nakedness and she sees his nakedness, it is a disgrace; and they shall be cut off in the sight of the sons of their people. He has uncovered his sister’s nakedness; he bears his guilt.

[Malachi 3:6] For I, the LORD, do not change; therefore you, O sons of Jacob, are not consumed.
[Hebrews 13:8] Jesus Christ is the same yesterday and today and forever.
[James 1:17 KJV] Every good gift and every perfect gift is from above, and cometh down from the Father of lights, with whom is no variableness, neither shadow of turning.

Morality is one. God is one. The truth is one; it never changes.

Genesis 6 shows the mixture of the compatible with flesh-and-blood beings from which emerged the giants as a result of the genes clash; hence we trace gene-a-logy. The new genes, Adamic, collided with the earthly genes, of the old creation, and with God’s permission.

As the first person with the free-will, Cain, was called to overcome (Genesis 4:7), but he did not, hence; he was called the devil. Enoch, a direct descendant of Adam did overcome and God too him.

The free-will of man makes us like God. Our choice brings us to the point of sanctification or annihilation. We overcome by choosing. We have been traced and discovered. God delights in us.

Who are the “THEY?” – God’s sons, sheep (not goats, not chaff, not tares) His overcomers.

Not because of the mix that God limited man’s years to 120, but rather of the continual evil, violence, unrest and strife with no break and now repentance; NO PEACE.

In order to repent one would have to have a little love for God and His creation, but there was none.

God’s sons had “ALSO” become as the rest of mankind.

[Genesis 6:3] Then the LORD said, “My Spirit shall not strive with man forever, because he also is flesh; nevertheless his days shall be one hundred and twenty years.”

This would be a sufficient reason for wiping out mankind; hence the word “nevertheless” or “yet” as if reconsidering and giving this process a chance.

After 6000 years this process comes to an end, and out of it comes the remnant, triumphant and glorious, the overcomers, peacemakers called sons of God. They have triumphed over those other genes and have conquered flesh and its warlike ways.

The message ends with these two verses. Please watch the word PEACE.

[John 16:33] “These things I have spoken to you, so that in Me you may have peace. In the world you have tribulation, but take courage; I have overcome the world.”—Jesus.

[Revelations 3:21] “He who overcomes, I will grant to him to sit down with Me on My throne, as I also overcame and sat down with My Father on His throne”—Jesus.

One does not need to be famous and have a large following in order to teach the truth. Truth is discovered, it is intelligent and often hidden, but abundantly available to the humble and pure in heart.

It is the quality that counts and never the quantity. (One does not need to gain fame by doing crazy things, wearing funny hats and oversize glasses like Elton John did or Steve Martin just to break into the showbiz; stick their faces in many camera lenses.)